The success story of a media prize 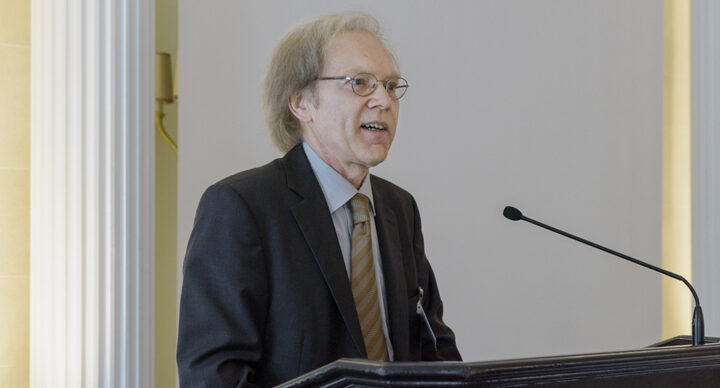 When did the breakthrough come? What helped to achieve the breakthrough?
If I had to name a year, it would probably be 2005, when we awarded Meinrad Ballmer and Marco Zanchi of the Tages-Anzeiger for their research on the financial fraudster Dieter Behring. This probably made it clear to everyone that our media prize honours independent and outstanding journalism, even if it critically examines individual players in the financial centre.

How many journalists took part in the early years? How many are there today?
In the first year, there were, it's hard to say, 6 journalists. Today there are well over 100.

Almost legendary are the laudations of the jury chairman Prof. Dr. Otfried Jarren at the respective award ceremonies. How did you manage to get such a high-calibre expert to take on the task?

After the Media Prize was first awarded in 2002, it was clear to me that I needed to complement the jury with a top-class, independent academic for the future. As director of the Journalism Institute at the University of Zurich, Prof. Jarren was already the luminary in the field at that time. In the meantime, he has also been President of the Federal Media Commission elected by the Federal Council for several years - it doesn't get any higher when it comes to journalism. Prof. Jarren was exactly the right person for me to take over as chairman of the jury. That's why I asked him for an appointment in 2003 and told him about my concerns. And he immediately accepted spontaneously and without complications. Since then he has been our jury chairman.


It all started in 1999, when you launched the magazine PRIVATE. What was the basic idea, what was the market environment like?
At that time there were all kinds of economic and financial publications. Strangely enough, however, there was no magazine that focused on the core competence of the financial centre at that time, namely private banking. A gap in the market that I was able to fill with PRIVATE - short for private banking. Of course, private banking is still a core competence of the financial centre today, but since then a few have been added, especially asset management and legal and tax advice.

PRIVATE is now in its 19th year of publication. How has the magazine established itself, what has changed since its foundation?

Journalistically, it was a different world back then. The Internet was still in its infancy and accordingly, the advertisements could not yet drift into nirvana. In terms of content, PRIVATE has changed parallel to the developments in the financial center. This is why we now offer a platform not only for private banking, but also for funds and asset management, law and taxes, real estate, as well as pension provision and insurance. What has remained the same over all these years is the high quality of the articles, which are written by real experts in the field. This is certainly a decisive factor for the success of PRIVATE.

Are there expansion plans or new activities for the Media Award and/or the magazine?

We will be adding PRIVATE to the NZZ in December. This is a great honor for our magazine and our authors. Normally the NZZ only accepts advertising brochures as supplements and not editorial magazines. We will also expand next year with the media award. Since we have recently received more and more spontaneous applications from business journalists, we will officially open our 2019 award to business journalists in addition to the existing financial journalists. The name - Media Award for Financial Journalists - will remain the same, however; after 17 years, it is not to replace a brand established throughout Europe without need.

Norbert Bernhard worked from 1988 to 1992 at the former Union Bank of Switzerland, where he was employed after an all-round internship in the press office and, as founder and editor-in-chief, managed the English-language in-house newspaper. Later he was responsible for PR and publications at the SBG investment fund subsidiary Intrag. In 1993 he founded AAA Publications for publications in the financial sector.

After initial preparatory work in 1999, the first issue of the money magazine PRIVATE (private.ch) appeared in June 2000. PRIVATE focuses on private banking, funds and asset management, real estate, law and taxes as well as pension provision and insurance. With a circulation of 35,000 copies and an estimated 170,000 readers, PRIVATE is today the largest financial magazine in Switzerland. PRIVATE is published once a year with a large circulation of 130,000 copies and an estimated 420,000 readers (supplement in the NZZ). The publisher is AAA Publications, an independent publishing house in Schaffhausen.

Published on 26. September 2018 by Roland Cecchetto
Back