More than 70 percent (72.7 percent to be exact) of finance sector employees want to spend up to 50 percent of their time working from home. But they are not prepared to take any cut in pay. More than half of all employees (55.8 percent) see career perspectives in the financial sector as good, differing markedly from the situation ten years ago. 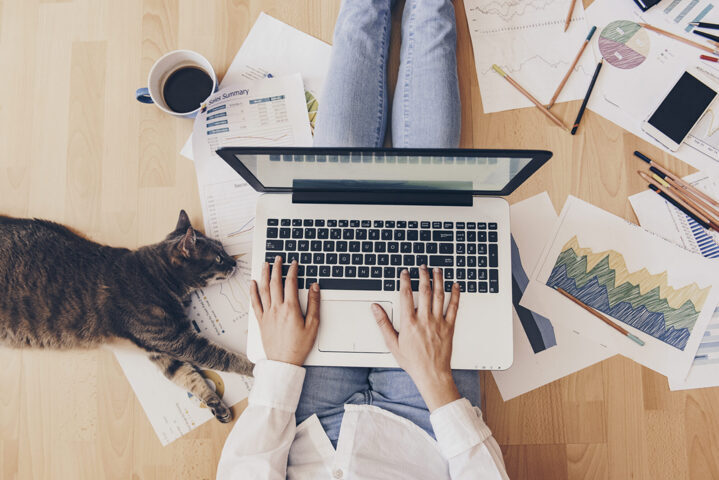 Working from home is popular in the financial industry. (Photo: Shutterstock.com/Creative Lab)

Remote working has clearly left an indelible impression on finance sector employees. Almost a third of all bank workers (31.4 percent) only want to work from home in the future. Hardly anyone wants to return to the office full-time. More than 70 percent (exactly 72.7 percent) of finance sector employees want to spend half their time working from home in the future. But 85.2 percent of them are not prepared to take any reduction in salary for that.

Those are the results of the 11th annual online survey of career perspectives in the Swiss financial sector. More than 1,100 people were polled by sector news portal finews.com, the Swiss Finance Institute (SFI), and Swiss public relations firm Communicators earlier this year. A review of the current survey against earlier ones leads to several interesting conclusions.

Career perspectives in the financial sector have improved enormously in the long term. In 2012, only 2.1 percent of those surveyed saw career prospects as being «very good», with 28.5 percent terming them «good». Now 11.5 percent rate the perspectives as «very good» and 55.8 percent as «good». That means that the level of prestige in the banking sector has risen substantially despite the reputational issues it has faced. They were also slightly higher when compared with the results a year ago.

The requirements for a career in banking are clear to most bankers.

The increasing pace of digitalization requires tech competence (mentioned as a factor by 73.8 percent of all surveyed) as well as a preparedness to face and adapt to continuous change (58.1 percent). It is particularly interesting that preparedness to change was mentioned by 71.5 percent of all surveyed a year earlier. Social competence (52.3 percent) was also highly rated in an increasingly complex work environment. A year earlier social competence was rated as important by 60.4 percent of those surveyed.

The largest career opportunities were those related to digital product innovation (57.4 percent of those surveyed rated it important) as well as in IT (57.2 percent) and in legal and compliance (46.4 percent). Also, two new areas were mentioned as having very significant prospects in the future, with 34 percent of those surveyed saying that private equity offered large career potential in the next few years, as do family offices (31.1 percent).

No Bonus for Every Fifth Banker

For the first time, the survey probed what factors hindered career development, with 43.3 percent mentioning the transfer of business activity overseas most, followed by 42.4 percent citing regulatory developments, with 40.3 of those surveyed seeing the new business models in the areas of fintech and DeFi as posing the largest obstacles. It was also interesting to note that 22 percent of participants saw competition from expats as posing the largest barrier to their careers.

The survey results indicated that one out of every five bankers (20.4 percent) received no bonus for 2021. For another 29.1 percent, the bonus was no higher in 2021 than it was a year earlier. The bonus continues to make up a substantial portion of annual compensation in the sector. For 39 percent of those surveyed, it comprised 10-25 percent of their annual salary and for 18.2 percent it was as high as 25-50 percent.

Most respondents are very conscious of the need for permanent, ongoing training in the financial sector, with 45.5 percent going to theme-specific seminars regularly, 37 percent attending public speeches and conferences, 25.5 percent planning to go to a course at an institute of higher learning, and 23.1 percent wanting to attend exam-free courses.

Published on 06. July 2022 by Manuela Walzthöny
Back