Newspapers made from Swiss paper are more sustainable

Perlen Papier, a CPH Group company, is a pioneer in recycling and is committed to sustainable domestic paper. Communicators realized the campaign. 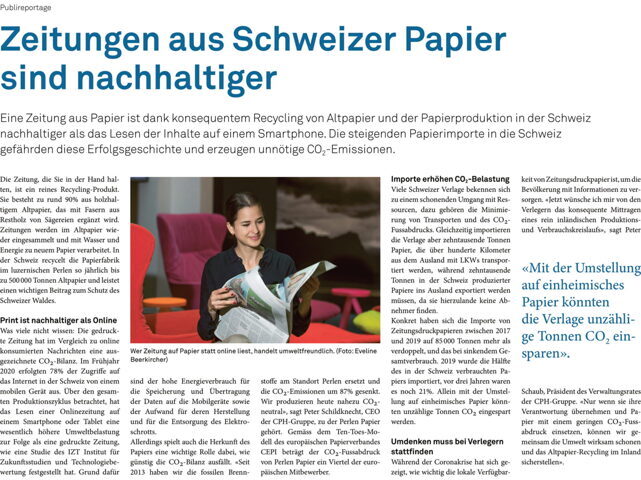 The paper mill in Perlen, Lucerne, processes up to 500,000 tons of waste paper per year into new newsprint, thus making an important contribution to the protection of the Swiss forest. What many do not know: Reading the news in a printed newspaper is less harmful to the environment than consuming the news online. However, the origin of the paper plays a crucial role in how favourable the carbon footprint of a printed newspaper is.

Although many Swiss publishers are committed to the responsible use of resources, they import tens of thousands of tons of paper which have to be transported by trucks over hundreds of kilometers from abroad—despite the fact that Perlen Papier is able to produce virtually CO2-neutral Swiss newsprint thanks to the consistent replacement of fossil fuels.

In an advertorial that was realized by Communicators, CPH demonstrates how easily publishers could reduce their carbon footprint. Published over a period of one month in newspapers of the major Swiss publishing houses, it encourages them to follow a purely domestic production and consumption cycle and thus do their part for the environment.

With the advertorial, CPH reaches a total of almost two million readers. In contrast to traditional media relations, the company benefits from complete freedom with regards to the content as well as from visual similarity to the editorial articles. Consequently, the advertorial—and thus CPH—enjoys great levels of both credibility and attention by the readers.

Published on 02. October 2020 by Alina Meletta
Back