With championships against the shortage of skilled workers

Young talents competed for the title of champion in 85 trades at the SwissSkills championships. While a painter from Appenzell and a plasterer-drywaller from Zurich received their gold medals, a former "SwissSkills" medallist is already preparing for the upcoming "WorldSkills". 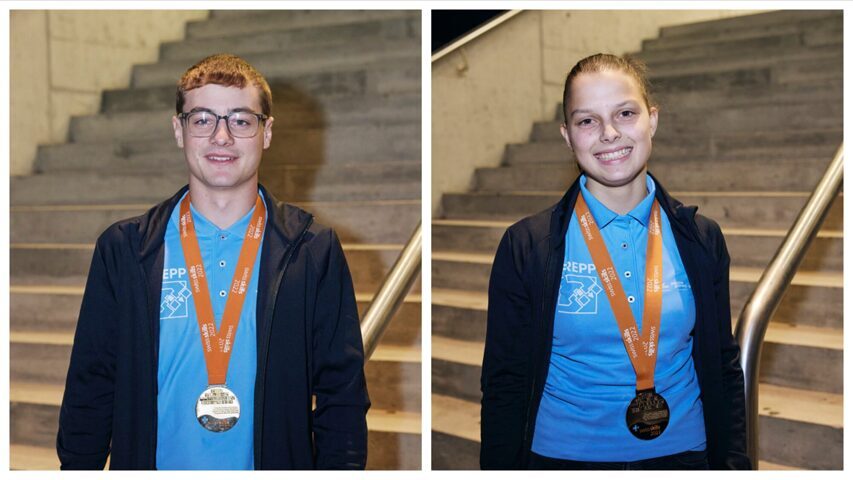 Like many professions, the painting and plastering sectors are also struggling with a shortage of skilled workers. However, this year's Swiss Skills Championships showed that promising young talent is waiting in the wings: seven plasterer-drywallers and 13 painters competed against each other in Bern in mid-September 2022. The painter Alexandra Höhener from Teufen AR and the plasterer-drywaller Michael Ryter from Grüt ZH finally won the championship title.

The 20-year-old Alexandra Höhener excelled during the competition in wallpapering quickly and accurately as well as in the precise implementation of a design. At the award ceremony, she could hardly believe her luck. "It felt totally surreal when I heard my name," she recalls. Michael Ryter was also blindsided when he was allowed onto the podium: "To be honest, I didn't expect it at all," says the 19-year-old. He was able to convince the jury with the dimensional accuracy of his work and the clean filling and plastering. The two Swiss champions as well as the runners-up now have the chance to take part in the international vocational championships, the "EuroSkills" in Gdansk, Poland or the "WorldSkills" 2024 in Lyon, France.

After "SwissSkills" is before "WorldSkills"

The "WorldSkills" 2022 will already take place in October. Since the WorldSkills Championships in Shanghai have been cancelled, 15 other countries are stepping into the breach. Switzerland is also hosting part of the competitions. Plasterer-drywaller Adrian Büttler, who won bronze at the European Skills Championships "EuroSkills" a year ago, will then compete for the world championship title in France. As at the "SwissSkills", Communicators will also ensure that the media are kept up to date on the Swiss participant's performance at the "WorldSkills". "Communicators' media work also ensures that potential trainees in painting and plastering become aware of these professions," says Petra Braun, Head of Marketing and Promotion of Young Talent at the Swiss Painting and Plastering Contractors' Association SMGV. "Inspiring role models like Alexandra Höhener, Michael Ryter and Adrian Büttler help to reduce the shortage of skilled workers.

Published on 14. September 2022 by Pamela Schefer
Back