With humour against littering

Littering is a nuisance and leads to high cleaning costs. That is why the IG saubere Umwelt (IGSU) is campaigning against littering with various awareness-raising measures. One of the oldest IGSU measures is the IGSU ambassador teams. While they ensure up and down the country that litter ends up in the bin, the Communicators team ensures that their commitment receives media attention. 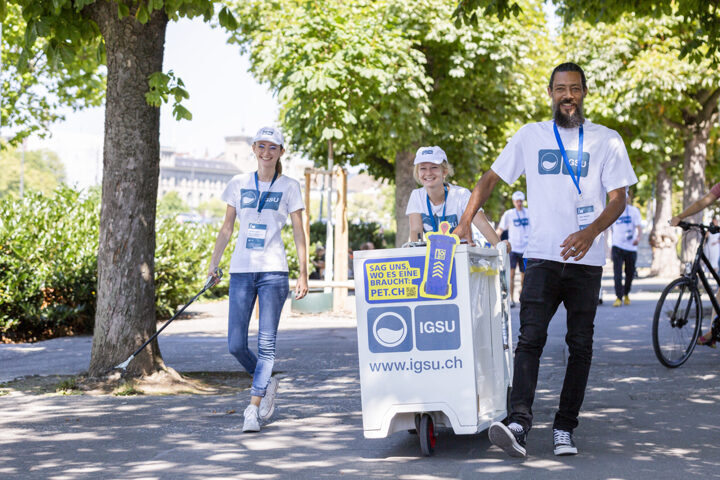 The IGSU ambassador teams raise awareness of the littering problem.

Kloten local councillor Fabienne Kühnis, musician and actor Damiano Morisoli and teacher Nadine Jurt have one thing in common: a clean environment is close to their hearts. Together with around 80 other nature lovers, they are involved as IGSU ambassadors against littering. With the relaxation of the Corona measures on 1 June, they started this year's tour through Switzerland with some delay. "Due to the epidemiological situation, they were unable to carry out any missions for a long time," explains IGSU Executive Director Nora Steimer. "They are all the more motivated now that they can finally get going while adhering to the protection concept."

The IGSU ambassador teams have been touring more than 50 Swiss cities and municipalities every year since 2007, talking to passers-by about littering and recycling. They also raise awareness of the litter problem in mountain regions in summer, autumn and winter and encourage summer tourists, hikers and snow sports enthusiasts to dispose of their waste correctly. Always with them are the white recycling mobiles, in which the waste can be correctly separated. "When I collect waste on roads and paths, I can approach passers-by in an informal way," reveals IGSU ambassador Damiano Morisoli. "A 'good morning' is then usually enough to strike up a conversation with them." An important focus is also the engagement at schools: The ambassador teams sensitise pupils of all ages to the littering problem with workshops, break and clean-up campaigns. "I was particularly impressed when the pupils were allowed to apply what they had learned themselves and then actively engaged in conversation with passers-by," says a delighted Nadine Jurt, an ambassador.

A lasting impression, also in the media

The success of the IGSU ambassadors is based on their relaxed manner, with which they sensitise young and old alike. "The best way to reach even intransigent litterers is to approach the situation with humour. Humour goes down better than a warning finger," says IGSU ambassador Fabienne Kühnis. It is precisely this humour and the lasting impression that the ambassadors leave behind that is also described in many newspaper, radio and television reports. Communicators is behind this: the agency's team not only informs the media about the missions of the IGSU ambassador teams, but also draws their attention to other IGSU measures, such as the national IGSU Clean-Up Day, the space sponsorships or the No Litter Label.